Recently lithium iron phosphate (LiFePO4) has been becoming the “best-choice” of materials in commercial batteries for large capacity and high power applications.

The LiFePO4 battery has hybrid characters: it is as safe as the lead-acid battery and as powerful as the lithium ion battery. The advantages of large format Li-ion (and polymer) batteries containing lithium iron phosphate (LiFePO4) are listed as below:

1) Conventional charging, just like lead-acid batteries
During the conventional lithium ion charging process, a conventional Li-ion Battery containing lithium iron phosphate (LiFePO4) needs two steps to be fully charged: step 1 uses constant current (CC) to reach about 60% State of Charge (SOC); step 2 takes place when charge voltage reaches 3.65V per cell, which is the upper limit of effective charging voltage. Turning from constant current (CC) to constant voltage (CV) means that the charge current is limited by what the battery will accept at that voltage, so the charging current tapers down asymptotically, just as a capacitor charged through a resistor will reach the final voltage asymptotically.

Because an overvoltage can be applied to the LiFePO4 battery without decomposing the electrolyte, it can be charged by only one step of CC to reach 95%SOC or be charged by CC+CV to get 100%SOC. This is similar to the way lead acid batteries are safely force charged. The minimum total charging time will be about two hours. 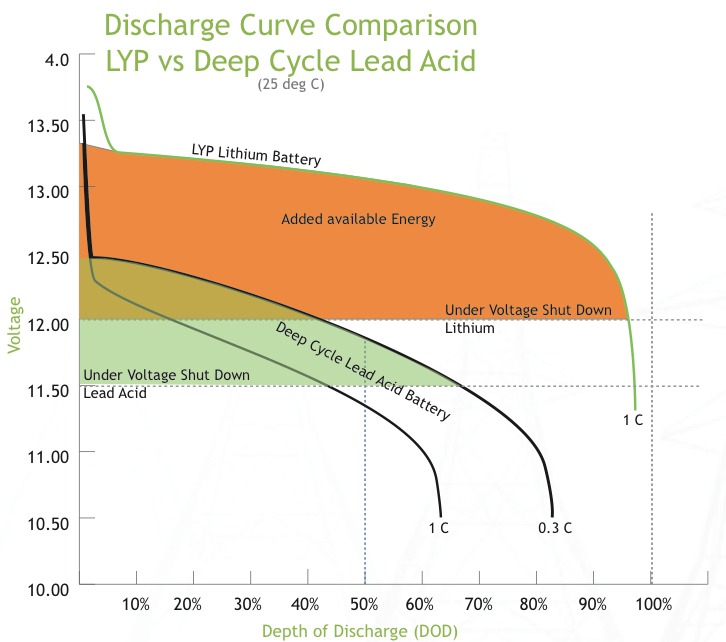 A LiFePO4 battery has a much wider overcharge tolerance than older Lithium batteries used in electric vehicles(LiCoO2).  The danger of fire and explosion are essentially removed. Due to the added safety factor, these packs are preferred for large capacity and high power applications. From the viewpoint of large overcharge tolerance and safety performance, a LiFePO4 battery is similar to a lead-acid battery.

A LiFePO4 battery can be safely overcharged to 4.2 volts per cell, but higher voltages will start to break down the organic electrolytes. Nevertheless, it is common to charge a 12 volt  4-cell series pack with a lead acid battery charger. The maximum voltage of these chargers, whether AC powered, or using a car’s alternator, is 14.4 volts. This works fine, but lead acid chargers will lower their voltage to 13.8 volts for the float charge, and so will usually terminate before the LiFe pack is at 100%. For this reason a special LiFe charger is required to reliably get to 100% capacity.

3. Battery Management
Unlike the lead-acid battery, a number of LiFePO4 cells in a battery pack in series connection cannot balance each other during charging process. This is because the charge current stops flowing when the cell is full. This is why the LiFEPO4 packs need management boards.

4. Four times higher energy density than Lead-acid battery
Lead-acid battery is an aqueous system. The single cell voltage is nominally 2V during discharge. Lead is a heavy metal, its specific capacity is only 44Ah/kg. In comparison, the lithium iron phosphate (LiFePO4) cell is a non-aqueous system, having 3.2V as its nominal voltage during discharge. Its specific capacity is more than 145Ah/kg. Therefore, the gravimetric energy density of LiFePO4 battery is 130Wh/kg, four times higher than that of Lead-acid battery, 35Wh/kg.

5. Simplified battery management system and battery charger
Large overcharge tolerance and self-balance characteristic of LiFePO4 battery can simplify the battery protection and balance circuit boards, lowering their cost. The one step charging process allows the use of a simpler conventional power supplier to charge LiFePO4 battery instead of using an expensive professional Li-ion battery charger.

6. Longer cycle life
In comparison with Lead-acid battery with only 300-1200 charge/discharge cycles, LiFePO4 battery provides up to 3000 cycles.